Happy New Year and welcome to 2020!!! With the holidays behind us, things are returning to normal if there is such a thing when poker is involved. 😊

Just a reminder to everyone that THR is a not-for-profit Internet Radio station. Your donations are mainly used to provide ALL of our bounties and prizes every night and, occasionally, they help to defer our costs to keep everything running. Nothing is free my friends!

As you may see from previous months, donations slowed in December and we paid out a lot more than we took in so we are hopeful that things will pick up in the new year, otherwise, amounts paid out for bounties will decrease.

Great turnout with 148 people in participation.

Biggest gain was Wrenchturn's 4th place finish for $2.00 to pad both #1 slot leads Wrench has hit 5 final tables out of his last 10 games this month.

Another great turnout to end the week with 144 players and exceeded the prize pool!

Modest turnout with 27 players and 50 total entries. More chances for you to snag some of the prize dollars courtesy of DigDug, PokerCuttlefish & Raddeckel! Thanks guys.

There were 3 $1.20 prizes for After-reg Chip Leader, ITM Bubble and Last Bandita. Also, two random bounties after the 5-min break were #9 Singmeatune and #13 Seaeyes.

GPeppin bubbled with a 7th place finish which kept him up top in the #2 slot. He received the ITM Bubble prize for $1.20, but it went unclaimed.

Robbiec33 took down 8th and received the Last Bandita Prize for $1.20. She also snagged a $2.40 bounty on Singmeatune.

Amdho took down the Win for $6.76! He also snagged the FT bounty for Joshua360, but was not in Chat to claim.

MrLaufer finished in 14th, but garners points to close with in 10 of #1 Finkel. He is in #2, passing GPeppin.

Not a bad turnout with 31 players for 60 entries and it has to be the Game of the Week, If there was anybody from the top of the leaderboard, they were there at the final table. One of the more hotly contested games this month -- with a lot of jockeying up top. 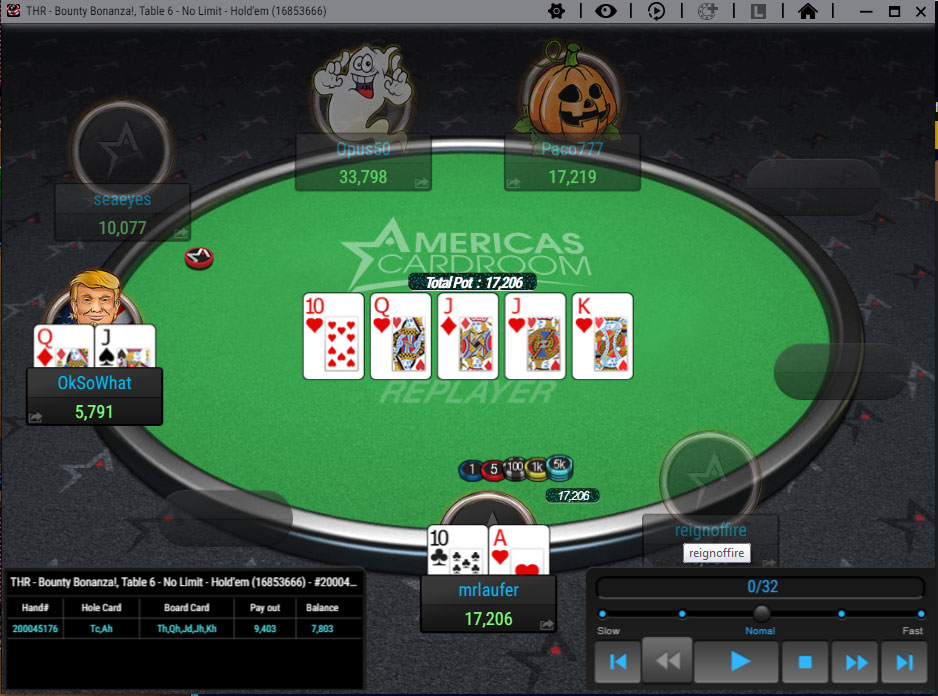 We had two mystery bounties, which may never be a mystery, on BenjiSnoopy & Shady Slim after close of registration.

MrLaufer took down 2nd for $4.05. Combined with his Win last Monday, he takes over the #1 slot on the board. He has been hot of late and no more so than his Royal Flush on the river last night!

BenjiSnoopy bubbled the cash for an 8th place finish. GPeppin finished in 9th. Both are tied for the #2 slot!

Below average turnout with 27 players for a total of 54 entries.

Tonight was Bounty Roulette after the 5-min break with 2Z1|0O5253 & Bottleup74 as our designated bounties.

GPeppin took down the Win for $6.00! He goes directly into the #1 slot on the board.

Paco777 followed up last nite's Win with a 2nd place finish for $4.05. This ties her with BenjiSnoopy in the #3 slot. Benji finished in 7th this night.

Fantastic turnout to end the week with 45 players and 78 total entries. One of our best 'non-event' turnouts since the hiatus. Heck, there was almost $20 worth of KO quarters floating around this night!

Tonight was Bounty Roulette after the 5-min break with 2Z1|0O5253 (2nd nite in a row, sorry bro LOL) & Singmeatune as our designated bounties.